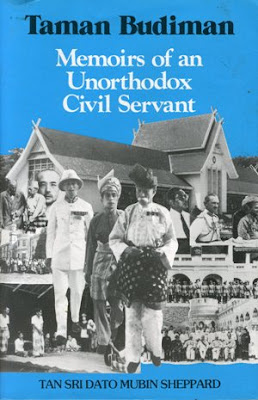 - 1939 August, FMSVF HQ held a mobilization exercises for each of the 4 battalions.

- Sultan of Selangor visited the Battalion in camp and dined in the Volunteer Officers Mess. His family members were officers and NCOs of D Company

- 1939, Nov, MUBIN SHEPPARD was engaged and by end of Jan 1940, married the sister of a fellow Malaya Civil Services(MCS) Officer in St Andrew’s Cathedral, Singapore. He was 34 yrs old and the bride, 36.

1941 Oct, Jungle training weekend organized for the company of Malay Volunteers, was met by sarcasm from regular army officers in the Kinta Club Bar

1941 1st Dec, General mobilisation of all troops and volunteers in Malaya was ordered

- MUBIN SHEPPARD told Williams, the District Officer and friends that he would be back to celebrate Christmas. He never saw his house possessions again from that date.

1941 8th Dec, C Company, 1st Battalion FMSVF camped in company tents and in thatched huts on the perimeter of the Ipoh Airfield.

- Japanese planes had morning and evening bombing raids and dropped anti-personnel bombs on huts and machine gunned trenches, without destroying the runway.

- FMSVF only equipped with Lewis guns with maximum range of 2,000 feet, hence ineffective against Japanese planes

- RAAF withdrew from the airbase one evening, but FMSVF D Company of 4 platoons remained at their posts till 23 Dec 1941 and was ordered to protect the civil engineers that destroyed the runway

1941, 24 Dec, FMSVF D Company handed over the defence posts to a company of Indian Regulars and withdrew to Kampar High School

- MUBIN SHEPPARD was informed to hand over command to second in command and report to Col Warren at Station Hotel, Kuala Lumpur immediately

- MUBIN SHEPPARD was to join “Stay Behind” parties to be located at the Sungei Lembing to Bundi area, off Kuantan at the East Coast of Malaya

- His duty was to operate wireless transmitters and carry out guerilla operations behind Japanese lines – in anticipation of British counter attacks when reinforcements arrived in Singapore (!)

- Col Warren was finalizing “Stay Behind” parties and has mentioned operatives like Spencer-Chapman, John Davies and Richard Broome

- John Davies was also organizing “Dalforce” which is a company of Chinese Communists from his house in Bellamy Road Kuala Lumpur (?)

1942 9 Jan, MUBIN SHEPPARD was however hospitalized in Singapore General Hospital as he was down with Tropical Typhus

1942 15 Feb, last issue of Straits Times published in the morning – single sheet, tabloid size with caption heading – “Singapore must stand: It shall stand, HE The Governor”

1942 16 Feb, Morning – Before Japanese take control of Singapore, Leslie Davis, Capt Clement( ADC to the Governor) and MUBIN SHEPPARD drove to the Government House to collect the Governor’s belongings.

- MUBIN SHEPPARD removed the Union Jack Flag which was flying over Government House till 12 Feb 1942. MUBIN SHEPPARD kept the flag sewn inside a sarong, concealed in a pillow case for the whole period of imprisonment and it was hoisted again on the 1st day of release in August 1945. Same year that MUBIN SHEPPARD was conferred a Major rank in the FMSVF

Email ThisBlogThis!Share to TwitterShare to FacebookShare to Pinterest
Labels: FMSVF