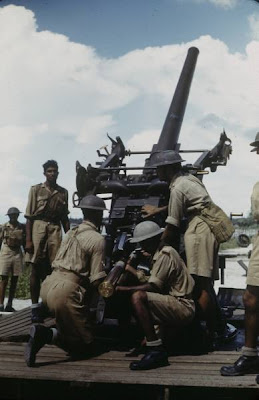 HKSRA Gunners manning a 3 inch Anti Aircraft gun on the coast of Singapore cir 1939. Note the gunner without his helmet- against regulations? Call the CSM! source : Life

1920-30’s – HKSRA expanded for defenses of Singapore & Hong Kong with the construction of the Naval Base in Singapore due cheaper to deploy Asian troops than British Soldiers.

Anti aircraft (AA) units were included in the HKSRA Regiments with 9 AA battery (6 fully operational) and 3 coastal battery available in Singapore by Oct 1941 (OCT 1937 – 1 HKSRA battery established). Further plans to include 12 guns manned by HKSRA in Penang and positions and plans for expansion of AA defenses to be completed by 30 Jan 1942

Rapid expansion has created problems as:

Email ThisBlogThis!Share to TwitterShare to FacebookShare to Pinterest
Labels: HKSRA