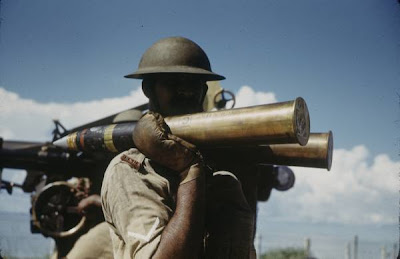 1842 May - A Royal Artillery Company based in Hong Kong for the first time:

- Plan to use Malay Soldiers serving in the British colonial units. They declined to be coolie laborers.

1847 - 90 Madras were recruited as Gun Lascars (laborers for artillery)

1899 – The battalion was renamed, Hong Kong Singapore Battalion, Royal Garrison Artillery (HKSRGA). The HKSRGA has 3 companies based in Hong Kong, 1 company in Singapore and 1 company in Mauritius. The 5 companies rotated around the 3 bases, for coastal defense duties.

1915 – HKSRGA company based in Singapore helped suppress revolt by 5th Light Indian Infantry. No. 1 company with 210 officers and men and 6x10 pdr guns mountain battery embark to Egypt to serve with the Imperial Service Calvary Brigade.

1916 – the battery was stationed in Abassia attached to Imperial Camel Corps – with guns transported by camels instead of mules. Saw service in Palestine in battles of Maghdada & Rafa.

1917 – Re-equipped with 2.75 inch guns instead of 10 pdrs. Took part in battles for Gaza, the capture of Jerusalem and the attacks on Ammaw, Es Salt, Abu Tehnib & Megiddo.

Email ThisBlogThis!Share to TwitterShare to FacebookShare to Pinterest
Labels: HKSRA